Archive for the ‘Dalai Lama’ Category

The Dalai Lama at the University of Arkansas 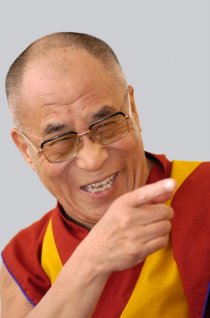 I got to see the Dalai Lama at the University of Arkansas in Fayetteville this past Wednesday thanks to my friend Pam who had an extra ticket. It was cool and I’m glad I went.  I didn’t take this top photo, but it reminds me of his infectious laugh and the way he would make jokes and laugh at himself.    Can you believe the Dalai Lama is a jokester? Whodathunk……

I was amused to see him kick off his shoes and sit cross legged on the couch.  I do the same thing!  As a matter of fact, I kicked off my shoes and walked barefoot to and from the car to get to the arena.  I think people thought I was a little strange, but I don’t care, that’s just how I roll.  Me and the Dalai Lama are like this (crossing fingers)…..

Here he is with his little red visor and sunglasses, he’s a charming little man.  The picture isn’t that great, but we were up in the rafters so it’s amazing I could get a picture at all.  I have about two dozen pics where he looks like he’s moving at super human speed from the blur.

His talk was interesting, although I wish I could have understood more of it.  I had to really concentrate to understand his accent.  It was kind of like when you have a computer problem and you call the tech department and someone with a heavy accent answers the phone….I love how accents sound, but sometimes it’s so hard to understand! You can relate to that, right?

My friend Pam sent me  a link to the transcript of his talk, so check it out, he has some interesting things to say.  Dalai Lama  Transcript

He laughed at himself a lot and called himself childlike. He’s all about non-violence in dealing with anyone and anything.  He said that having enemies or being around people that give you trouble is a good way to practice forgiveness and compassion.  Everyone is basically the same and how someone else acts is their problem, not  ours, so detachment from their behavior is important.  Easier said than done, I say, but it sure is a good thought.  I wish he would have expounded on how to forgive and make it stick, because I’ve found that forgiveness doesn’t always happen just from saying the words.

Here’s a little summary of who he is….

Question: How do you view yourself?

Answer: I always consider myself as a simple Buddhist monk. I feel that is the real me. I feel that the Dalai Lama as a temporal ruler is a man-made institution. As long as the people accept the Dalai Lama, they will accept me. But being a monk is something which belongs to me. No one can change that. Deep down inside, I always consider myself a monk, even in my dreams. So naturally I feel myself as more of a religious person. Even in my daily life, I can say that I spend 80% of my time on spiritual activities and 20% on Tibet as a whole. The spiritual or religious life is something I know and have great interest in. I have some kind of confidence in it, and thus I want to study it more. Regarding politics, I have no modern education except for a little experience. It is a big responsibility for someone not so well equipped. This is not voluntary work but something that I feel I must pursue because of the hope and trust that the Tibetan people place on me.


He’s the spiritual leader of the Buddhists which I’ve always found to be a fascinating religion.  They believe in reincarnation, and so do I.  I find it hard to believe that we can learn all that we need to learn in one itsy bitsy human lifetime.  When you think about it, the span of a human lifetime is like a grain of sand when viewed through the lens of the universe……in other words, it’s really short!


He said that when people see him or other monks and gurus as being magical, that it’s a bunch of nonsense.  Then he laughed that funny little laugh of his that cracked everyone up even if we couldn’t understand a word he was saying!


This is probably before everyone else’s time except mine, but years ago there was a cartoon called “The Perils of Penelope Pitstop”.  The villain was called Dick Dastardly and his dog was called Mutley.  Mutley had this whispery, raspy laugh “he hee heee heee heee”  that sounded just like the Dalai Lama laugh.  How funny is that?!

I can’t say that I learned a lot, but it was super cool to see such a famous spiritual leader in person and to see how down to earth and childlike he is.  His energy is very kind and appealing, definitely a high vibe kinda guy.


I don’t worry about my own childlike (or maybe mine are childish)  tendencies now, since me and the Dalai Lama are like this (crossing fingers)!

Have an awesome Saturday!